Onyx Solar® has taken part in the refurbishment of the highspeed Union City station in San Francisco, supplying the safety laminated (8 + 8) photovoltaic glass included in the immense canopy of the new building.

The canopy is comprised of 800 crystalline silicon photovoltaic glass modules measuring 1,805 mm x 1,137 mm, totalling a power capacity of 172 kWp (215 Wp per module). These modules are capable of generating 174,280 kWh per year, sufficient to power 10,000 lights and to prevent the release of almost 120 Tons of CO2 into the atmosphere and the consumption of 105 barrels of oil. The glass features a ceramic screen print on its reverse side, endowing the interior of the canopy with an elegant, uniform design.

This glass was designed especially for this project, which achieved UL 1703 certification, a guarantee of its optimal efficiency and quality, ensuring compliance with the highest quality and safety standards in the case of mechanical or electrical issues, and also its resistance to fire.

This photovoltaic canopy was Onyx Solar®’s first project in the United States and it is considered to be one of the largest photovoltaic integration operations executed in the country. For this reason, it was leading news in many of the most significant journals of the sector, such as “Glass Magazine”, belonging to the National Glass Association. The station, included in the Bay Area Rapid Transit (BART) system, operates five lines over 167 km, and has 43 stations in four counties. This system carries over 320,000 passengers daily, placing it in fifth position of those most used in the United States.

"Onyx Solar® was the only company capable of meeting all the requirements for the design of the project, and providing a solution of exceptional quality while working under difficult conditions, with a tight budget and short delivery schedules”. 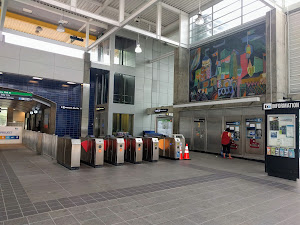